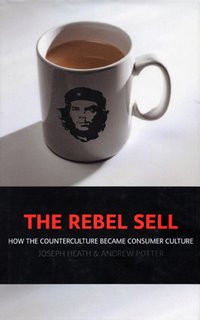 What is the “countercultural idea”? What is wrong with it?
The countercultural idea arises out of the critique of the so-called “mass society” of the ’50s. According to this view, the modern era begins with the introduction of mass production on the factory floor. This allows us to produce great wealth, but it brings with it some unfortunate social consequences. It requires that both workers and consumers conform to the tyranny of the machine: that workers become like robots, enslaved to repetitive tasks, and that consumers come to accept the cookie-cutter homes, cars and appliances that are spit out in ever-increasing quantities by the factories. Thus modern society requires the repression of everything that is spontaneous and individual, whether it be sexual pleasure, artistic creation, or even just individual self-expression. In order to get people to accept this, a massive propaganda effort must be undertaken – spearheaded by corporate advertising. As a result, the entire culture has become dominated by the ideology of consumerism, designed to encourage acceptance of the industrial system.

The problem with modern society, in other words, is not that there is class hierarchy, or social inequality. The problem with society is society itself – the fact that we are forced to obey rules, conform to the dictates of mainstream society, and to consume the generic products of the industrial system. Thus it is not enough to argue for reform of this or that aspect of the political or economic system; one must reject the culture in its entirety, and form a counterculture. One of the signature marks of countercultural thinking is the idea that any form of resistance or rule-breaking, no matter how tangential to the political or economic system, represents a threat to the system. Thus doing things like refusing to wear a suit, growing your hair long, getting a few piercings, listening to loud music, or doing some recreational drugs came to be seen as politically radical gestures – as a refusal to bow to the tyranny of mainstream society. Of course, more than 40 years of this sort of rebellion do not seem to have brought “the system” to its knees. In fact, consumer capitalism seems to be doing better than ever, despite decades of such radically “subversive” gestures.

This is where the second major component of the countercultural idea comes in – the theory of “co-optation.” The fact that none of this cultural rebellion ever seems to change anything doesn’t prove that it is useless; what it proves is merely that the system is extremely good at “co-opting” dissent. The consumer society is adept at taking the symbols of rebellious youth, mass-producing them, and selling it back in the form of “rebel chic.” In so doing, it evacuates these symbols of their subversive content, and thus neutralizes the incipient rebellion. It is only when these efforts at co-optation fail that the “violence inherent in the system” will be revealed.

In our view, there is no such thing as co-optation. What countercultural rebels call co-optation is in fact just competitive consumption, instigated and exacerbated by the rebels themselves. This is why rebellion of this sort has become one of the major forces driving consumer capitalism in the past 40 years. The reason the system never changes is that cultural radicalism is not genuinely radical. Mass production does not require conformity, and the capitalist system is fundamentally indifferent to grey flannel suits and biker jackets. Countercultural thinking has created a massive diversion of progressive energies into politically and economically irrelevant pursuits.

The Rebel Sell : Why the Culture Can’t Be Jammed